This full moon (May 5/6) is called super because it is 8% larger than a normal full moon, primarily due to a closer than normal approach by the moon to the earth.  Billie and I are in Cashiers for the weekend, and I set my goal to photograph this super moon as it rises above Chimney Top Mountain ( 4,618 feet) here at the High Hampton Inn. 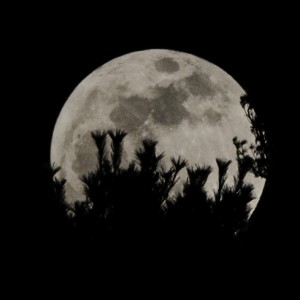 I prepared for this event by searching for estimated exposure data for the full moon, and suggestions for this exposure were a good start for my work.  I found a covered, sturdy porch with a view to the East so I could catch the moon rising through the trees on Chimney Top Mountain.  Although the moonrise was set at 8:11 pm EDT, I didn’t see the moon until much later, about 9 pm, because of Chimney Top.  When I saw the glow in the treeline I knew exactly where to focus my camera, using the 70-200 mm f/2.8 Nikkor zoom lens set at full telephoto focal length of 200 mm.   The moon rising through the trees was photographed using an exposure of ISO 200 and shutter speed of 1/250 sec at f/11 aperture. I followed the moonrise through the mountaintop treeline, taking lots of shots and checking the exposure as the moon rose to reflect more and more light as it cleared the trees.  This shot, with just the last bit of treeline silhouetted against the glowing moon, is my favorite of the night.  The tiny bit of treeline maintains the perspective relative to ground-based objects, yet it shows almost the entire image of the “Super Moon.”  This image was taken at 9:17 pm, more than an hour later than the published  moonrise time!  Adjustments to the norm often are required here in the mountains and we learn to take these variations in stride because of our surroundings.  The trade-off is worth it!

This third image was taken at 9:25 pm using an exposure of 1/500 sec at f/11, still at ISO 200 and 200 mm focal length for the lens.  Here the moon has cleared the trees and is higher in the atmospheric layer, so the shutter speed was increased to compensate for the greater reflectivity and brightness.  The post processing in Lightroom 4.1 was adjusted to increase the contrast and bring out details within the craters on the moon surface.  The images are a little darker than one might expect, but that effect is intentional in order to increase the contrast and detail.   Although these shutter speeds are high enough to tempt one to shoot without a tripod, I resisted that temptation.  Not only did I use a tripod, but I also used the mirror lock function so that every possible contribution to camera shake could be eliminated.