Last weekend Billie and I stayed at the High Hampton Inn in Cashiers where she attended a knitting retreat sponsored by Yarn Paradise of Asheville.  I of course enjoyed the food presented by the High Hampton chef, but while the ladies were knitting I set out to hike to some of the waterfalls in the area.  Last fall at a previous retreat I visited Whitewater Falls, the highest waterfalls in the Eastern US, so this year I decided to explore some of the sights along the Horsepasture River, one of the shortest rivers having the National Wild and Scenic River designation in NC.

Access to the Horsepasture is only by a trail which begins at this trailhead in Gorges State Park, even though the river is actually not in the State Park.  The trail leads into the Pisgah National Forest, then alongside the river to the several interesting waterfalls which lie upstream from this junction.  Some years ago people accessed the river and the falls by parking along  Highway 281 and hiking in from above, but this is no longer allowed because of private ownership of the access lands from that direction.

I knew these restrictions when I got to the trailhead, so I was not surprised to see the cautions posted at the trailhead.  As I stood there reading the current posted trail information, I was suddenly aware of a presence to my right and, turning slightly that way I saw a large dog moving toward me.  He seemed friendly enough, so I spoke to him and went on with my reading.  He stayed by my side as I got my photographic gear from the car, and as I moved toward the trail the dog followed me, keeping pace as if he were my life-long companion who was used to hiking with me. Since the dog had a collar and tags, I assumed that he belonged to someone on the trail, and I confess that I thought about being led to an injured hiker somewhere along the trail.  I kept my eyes open for fallen hikers but saw none, and when I arrived at the first waterfalls on the Horsepasture I still had not seen another person.  My companion stopped when I stopped to photograph wildflowers along the trail and waited patiently until I resumed the hike. 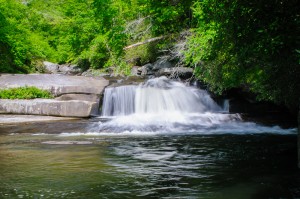 When I reached Hidden Falls, I stopped to photograph the falls, eat an apple, and drink some water I had brought along.  My companion waited while I had my snack, then went to the river’s edge and had a drink himself.  At this point we saw our first people on the trail, four college-aged guys who were moving rather quickly upriver, and they gave no indication that they saw me or my companion on the huge rocks in the river. 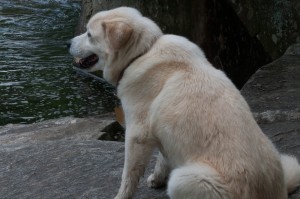 A short time later we saw some college-aged girls working their way upstream on the boulders in the river.  My companion showed a bit of interest in these humans, perhaps indicating that he knew them or perhaps not, but he stayed by my side as we watched them climb over boulders below us.  I noticed that it was 11:00 am and decided to head back to the trailhead, so I invited my companion to go with me as I made preparations to leave our resting place on the huge boulder in the stream.  He didn’t move, but stayed there as if he had a mission that must be fulfilled before he could go back.

I hiked back to the trailhead alone but, unlike on the hike in, I now met many people hiking toward this beautiful wild river.  I kept up the pace as well as I could, completing the distance back (~1.2 miles) in 45 minutes.  I had to stop twice to catch my breath after climbing particularly steep portions of the trail, but overall I was pleased with my progress and with my conditioning.  I realized that I had made a serious mistake in planning my hike, bringing all my photographic gear rather than selecting just what I would need to photograph the waterfalls.  When I got home I weighed the photo backpack and tripod and found that I had been carrying 26 pounds on this hike!  Even though I’m pleased that I was able to carry that weight on the trail (which is labeled “strenuous” by the park service) that’s a mistake I won’t make again.

2 Responses to The Ghost Dog