We found a monarch butterfly yesterday at the NC Arboretum.  Since it was only one butterfly and we were a bunch of shameless photographers scrambling to find something to shoot, there we were all clustered around that one poor butterfly trying to snap the shutter in sequence with the occasional flapping of its wings.  It was a tough guessing game, and I didn’t succeed very well at it.  Most of my shots were out-of-sync with the spreading wings, and only two shots out of about twenty showed the full display of colors.  Even these two shots have focus problems, with some wing blur resulting from movement during the exposure.

This butterfly was feasting on the juices of a succulent sedum flower with a color almost perfectly matched to the color of the monarch’s wings. 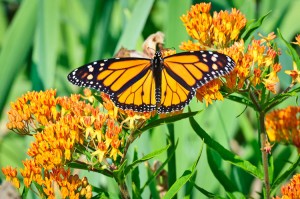 I hoped to get the perfect shot before I moved on, but the heat of the sun and the ultimate recognition of my role as one of five photographers zeroed in on that one poor butterfly caused me to get skittish.  I decided I had spent enough time in this one place, so I moved to another subject without getting the perfect shot of the monarch, and I have no one but myself to blame for this.

Why did I feel so self-conscious about this situation?  My fellow photographers apparently had no concerns about clustering around this one butterfly, and some stayed for far longer than I did.  Maybe it’s a matter of patience, but I think it must be my introvert nature.  I feel much more comfortable with solitary efforts at creativity than with group efforts, and I think I began to view this as a group project after a few minutes.  Whatever the reasons, I bailed out without getting the shot and I felt better about for having moved on.  I guess I’m just a solitary old cuss when it comes to taking photos!