Billie and I made a quick trip to Asheville last weekend, thinking that we hadn’t been in a long while and that we wanted to catch up with happenings in our favorite nearby mountain city.  We made our usual stops at the Biltmore Village shopping area and had lunch at the Corner Kitchen, and then we decided to do something very different for the rest of our trip.  The Arboretum was tempting, but I’m scheduled to go there for a CNPA outing on June 11 so the urgency of going there on this trip was reduced.  The Botanical Garden near UNC-Asheville was also tempting, but neither of us thought it exciting enough on this trip since we didn’t expect to see much blooming at this time.  So we decided to follow up on a longtime promise we had made to each other to drop by the Western North Carolina Nature Center to see what they have to offer. It was a good decision!  This place has a limited selection of animals but the ones they have are pretty interesting.  I was drawn to the Timber Rattlesnake exhibit where I saw a couple of huge snakes sleeping in a heap, with another pretty large one sleeping off in the corner of the exhibit space.  I took a photo of the sleeping rattlers to show how large they were, thinking that the photo would be pretty dull and that I wouldn’t waste film on this shot in the old days of film cameras. 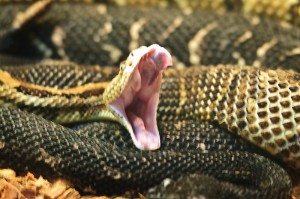 Just as we were ready to walk to the next exhibit where we could admire the copperheads, the largest timber rattler gently raised its head just a bit and stretched out a protracted yawn.  At first I was overwhelmed by the view of a timber rattler showing me his tonsils (?) like this, but then I somehow found the shutter button on my camera and took a shot of this spectacular yawn.  I have never seen this kind of display before from any kind of snake, and I’m actually surprised that I was able to get a shot to share here.

Note that the snake is not in any kind of coiled or strike position, and the head is not raised as it would be if the snake were actually striking.  Also, notice that the snake’s fangs are retracted against the roof of its mouth, further evidence that this was merely a yawn rather  than anything resembling a strike.  Just a yawn, but let me tell you it was a yawn that got my attention!  And I’m feeling really lucky that I got the shot, even if it isn’t the sharpest image I’ve ever published.

Professor Emeritus of Chemistry, Appalachian State University.
View all posts by Tom →
This entry was posted in Animals, Wildlife Photography. Bookmark the permalink.