Several years ago I took a marvelous close-up image of a great egret in full breeding colors during a trip to the Everglades.  This egret was almost tame and allowed me to get really close, so I was able to get a genuine portrait of him.  You know the routine—fine detail, perfect exposure, impeccable focus, excellent framing, and then you notice that background! I’m almost ashamed to show you what I brought home, but to make my point I must.  The shot did indeed have all the marvelous characteristics I named above, but my excitement with getting the shot generated tunnel vision so that I didn’t notice the bright green railing and the water and boats beyond until it was too late and I was already far away.

In the years since that bright green railing slammed me back to reality I have learned to look for distracting elements in the photo before clicking the shutter, but I don’t always have time or the freedom of movement to get a shot with a perfect background.  Despite warnings to perform a “border patrol” or to “count the corners” as part of the process of composing the image, sometimes you just have to take what you can get.  In those cases you have only one option, which is to try to clean up the background later in post-processing.

Adobe Photoshop offers the opportunity to replace entire backgrounds if one has the skill and perseverance to work with layers, but this is a skill which requires much patience and lots of practice.  I’ve tried it, but I’ll be honest—I gave up many times on this very photograph.  My hand with a mouse isn’t nearly steady enough to enable me to carve out the egret from this photo, and the margins always looked crude and artificial when I did try it.  I eventually bought a Wacom tablet to attempt finer control of the selection brush, but that method didn’t work for me either.  I found that I tried to use the Wacom pen like I’ve always used a mouse, and I never did unlearn those movements.  Long story short, I sold the Wacom tablet for about half what I paid for it, and I was glad to be rid of it.

But now I’ve found a solution which even I can make work pretty well.  In July I went to a workshop in Beaufort, SC sponsored by the Photography Club of Beaufort and taught by Kate Silvia of Charleston.  Kate demonstrated the Google Nik Collection and a few of the programs in the Topaz suite, and I was particularly taken with the capabilities of Topaz Impressions which I wrote about in my previous blog entry.  She also demonstrated the capabilities of Topaz Remask, and I decided this week that I should give Remask another try.  Remask 5 is a 64-bit program which functions just like Remask 4 as a plug-in for Adobe Photoshop, Adobe Lightroom, and Adobe Photoshop Elements.  The big news is that Remask 5 now also functions as a stand-alone program so that it can be used by photographers who don’t have either of those host programs. I began a 30-day trial of Topaz Remask 5 to see what I could do with it.  After viewing a short You-Tube video I felt that I would be able to use the program, so I began the process.  My first trial naturally involved the egret photo above, and I picked a background image which I had shot at Donnelly Wildlife Management Area in February.

The background is an ordinary image without distinction, showing one of the small islands along the access road.  When I shot this image I was preparing to get closer to shoot some black-crested night herons that were roosting on the island, but I didn’t get any usable photos from that effort.  I kept the image, though, because it was sharp and had a tinge of the sunrise color washing across it.  This became my background for the new egret image.

In a surprisingly short time and with very little effort I was able to remove the distracting background from the original egret photo and replace it with the Donnelly WMA image.  I shifted the Donnelly image around, trying different orientations, and eventually settled on this combination for the final image.  I think it’s a pretty good portrait! 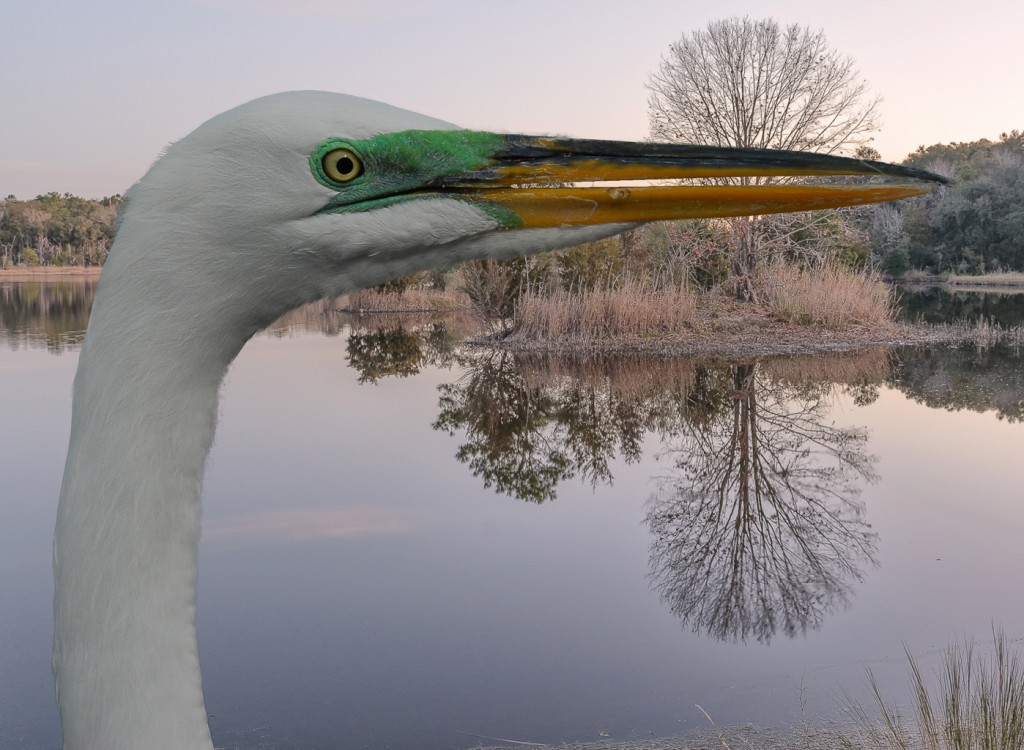 Professor Emeritus of Chemistry, Appalachian State University.
View all posts by Tom →
This entry was posted in Birds, Commentary, Software. Bookmark the permalink.