Herons I have known

Since coming to the Lowcountry I’ve expanded my circle of friends in the heron family.  Although I already knew the largest member of the family, I only recently became more closely acquainted with some of the smaller and less-well-known herons, including those sporting immature plumage. 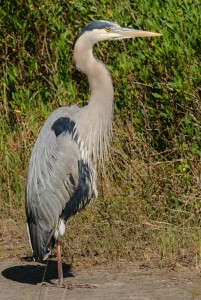 Great Blue Heron.  This stately sentry met Billie and me at the entrance to Pinckney Island National Wildlife Refuge on our first visit there.  He stood at attention, just like the Palace Guards in Athens and London, while being photographed and he was still standing there when we left him to explore the island.  Unfortunately he had moved on when we returned.  Every time I visit Pinckney Island NWR I look for this heron, but I haven’t seen him since that first visit.

We see these wading birds fishing the lagoons in Sun City and I’ve seen Great Blues everywhere I’ve lived as well as in the UK.   Recently I licensed this photo for use on a wellness website in the UK. 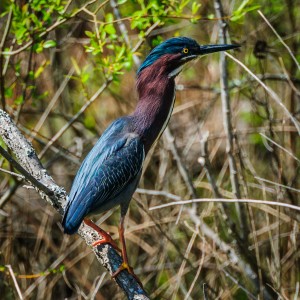 Little Green Heron.  I first met the Little Green Heron at Pinckney Island NWR, but since then I’ve found others in Boone (NC) at the Mayor’s Park, at Lake Somerset here at Sun City-Hilton Head, at Savannah NWR, at the Port Royal Wetlands Park, and on HHI at the Audobon Preserve.  Although much smaller than the Great Blue, this heron is just as beautiful and is a joy to watch as it intently hunts for a meal in the shallows. 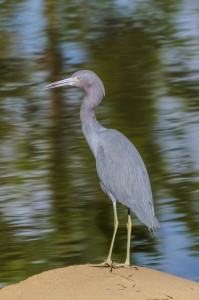 Little Blue Heron.  This heron is found almost everywhere in the Lowcountry and in many locations elsewhere.  I’ve seen this heron in Costa Rica as well.  It is interesting to note that often the sightings of this heron are recorded incorrectly by novice birders because the immature Little Blue Heron is white.

Identification depends upon correctly noting the dark tip of the beak and the greenish legs of the white bird, thus distinguishing it from the white-bird-yellow-beak-black-legs Great Egret. Confusion of the two is easily (and often) done. Yellow-Crowned Night Heron.  I met this heron last June at Fish Haul Beach Park on HHI as it was foraging for its breakfast among the skittering fiddler crabs.  This heron seems to be partial to these small crustaceans, and the feeding process is fascinating to watch. 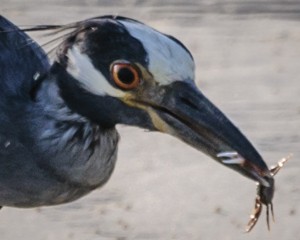 As the heron selects its next victim it deftly bites off the large “fiddle” pincer before swallowing the rest of the morsel whole and then it quickly moves on to the next one. This process is well-practiced and proceeds quickly as the heron eats its fill.

I first met the Yellow-Crowned Night Heron in Costa Rica, but I didn’t observe any feeding habits of the bird there since I only saw it perching in a tree along the canal.  There is also a Black-Crowned Night Heron (with obvious differences in the plumage on its head), but I have not yet seen one. 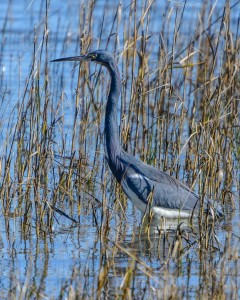 Tricolored Heron.  I find the Tricolored Heron much less frequently than the other birds named here, but it is always thrilling to see this beautiful heron emerge from its stealthy hideout in the shallows along Fish Haul Beach Park or on Pinckney Island NWR.  It is not as large as the Great Blue but it is certainly striking to see the reddish head and neck, the blue-gray of the back and wings, and the white underbelly of this bird.  It’s one of my favorites.

4 Responses to Herons I have known