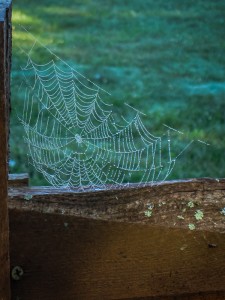 Walking the Greenway today was an adventure.  The fog was heavy, early, and every spider web was cloaked in fog droplets, looking for all the world like strings of crystal pearls.  This web was an example that caught my eye and I took the photo with the Canon P & S camera which I always carry in my pocket when hiking the Greenway Trail.  I didn’t see any signs of life on this web, so I don’t know whether the resident spider was sleeping in or simply hadn’t come out in the heavy dew. The web in the photo to the right is a much larger one than the first one on the left above, but both show the same general characteristics of web construction.  Does that mean they are built by the same type of spider? 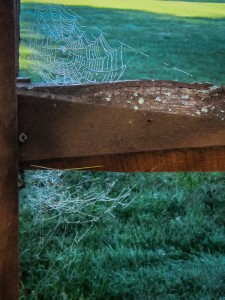 This third photo shows two webs, one above and one below the fence rail.  I’ve titled this photo “Darn those messy neighbors down the post!”  Clearly these must be different spiders because the webs are so very different.  In fact, I’ve always been told that the helter-skelter type web “down the post” is characteristic of the black widow spider.  I don’t know what type built the web shown here, but the contrast is striking, isn’t it?