Recently I’ve been working with digital images that display what I call the “Monet Effect” because of the subtle rippling of the water surface which gives a painterly appearance to the reflected image.  The image appears to be somewhat out of focus when viewed in the thumbnail, but when viewed as an enlarged image the surface ripples are seen to be in sharp focus.  I’ve posted a few of these images here and in photographic forums I frequent, and the response has been interesting. 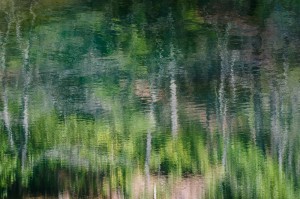 One friend who offered a critique of this image suggested that I rotate the image by 180 degrees, thus reinforcing the Monet Effect to the fullest by bringing the trees into an upright position rather than have them as an upside-down reflection.  I’ve applied that rotation here, with no other changes to the image.  Compare these two views of this image, putting aside the knowledge that this really is a reflected image whichbelongs in the first orientation above.  Does the rotation enhance the image?  Let me know what you think.

1 Response to The Monet Effect