I found this pair of American coots this week feeding in the Ibis Pond at Pinckney Island NWR and had a great time watching them as they leisurely foraged the pond.  Coots are swimming rails with chicken-like beaks which distinguish them from ducks, and this waterbird is common throughout North America.  Other forms of coot are found in South America and in Europe.

My visit to the Ibis Pond this week included observations and capture (only with camera, of course) of 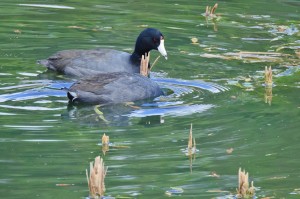 four kinds of waterbird: American coot, white ibis, pied-bill grebe, and American egret.  I also saw alligators and, from a distance too far to photograph, other birds in flight and some songbirds which I did not identify.  All-in-all, a good day in the NWR and a good week for observing wildlife.

It’s interesting to note that in this same week  I observed a Bald Eagle here in Inverness Village as it soared over the lagoon and perched in a large overhanging tree.  It sat there for some ten minutes as I watched it scan the lagoon and then, apparently not finding a meal, it lifted off and flew away across the forest toward the ocean.  Although I was surprised to see the eagle here rather than in the NWR, I did enjoy observing it and I felt lucky to count it among my observations this week.  How fortunate to live in such an environment where wildlife is so abundant!

Professor Emeritus of Chemistry, Appalachian State University.
View all posts by Tom →
This entry was posted in Uncategorized. Bookmark the permalink.