I wrote yesterday that I use Photoshop CS5 only occasionally, sometimes for fun things like making orbs or making kaleidoscope displays, but more often for fine-tuning images in ways that I can’t do in Lightroom.  Let me give you an example. On a recent trip to Colonial Williamsburg, Billie and I were preparing for the trip home when we noticed a blue jay outside our hotel window.  He was fluffed out to protect himself from the cold, sitting there in the tree beneath our window enjoying the morning sun.  He was the picture of contentment, soaking up some rays, and he seemed very happy to stay there without jumping around like blue jays often do.  So I took his picture.  Lots of times.  From every angle I could find from that hotel room window.  But no matter how I moved around the length of our window, all of the images had a serious flaw which I just could not change.  The twig projecting across the jay’s torso was always in the image, and since the jay wasn’t moving, the twig wasn’t going away! 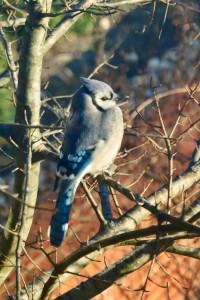 So I took what I could get, adjusting the exposure and the depth of field to optimize the image, hoping all the while that somehow that twig would fall away or the jay would move to another perch or that some other miracle would happen.  But no, not gonna happen!  It’s time for our bus to leave, so off we go, flawed image and all.  When I got home and began to process the images from the trip I remembered reading about a new feature in Photoshop CS5 called content-aware fill, and I had seen it demonstrated effectively in a Moose Peterson video, so I thought about trying it on my blue jay image.  There is a link in Lightroom 3.3 which enables editing a photo in an external editor such as Photoshop CS5, so I clicked on that link to open the image in CS5.

Using the healing brush set to content-aware fill, I brushed over the twig from right to left, and CS5 magically replaced the twig pixils with some from the surrounding content!  That’s all I had to do, and the twig was removed from the image.

Some people will say that’s cheating, or that’s not real, or it’s not good photography.  But I disagree.  I maintain that it’s nothing more than just another tool to enable the adjustment of the digital image to record what my mind’s eye saw outside the hotel window.  When I saw that blue jay, close up and still like I had never seen one before, do you think my mind’s eye saw the twigs in front of the image?  No indeed, at least not initially.  It takes a practiced eye to see the twigs or power lines or piece of litter which can ruin a beautiful landscape vista and turn it into an ordinary snapshot.  And when the photographer sees the impediment but can’t shoot around it, it takes a powerful tool like content-aware fill to allow the photographer to recover that snapshot and make it into the beautiful landscape or portrait seen in his mind’s eye.