Recently The Atlantic ran a feature on the ancient Chinese custom of cormorant fishing.  Although now a dying art, Chinese fishermen have for thousands of years used trained cormorants to fish local lakes and rivers.  Today the practice is more and more restricted to performances for tourists, but I observed a fascinating example of this art just this week here in Sun City-Hilton Head (SC-HH). 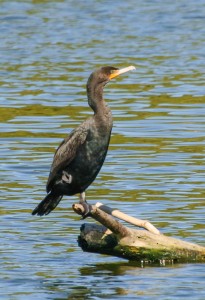 The cormorant is very common here in the Lowcountry, and this time of year these water birds flock to the lagoons in SC-HH to feed as a group.  They are efficient fishers, swimming underwater to pursue fish they spot there.  Apparently the cormorant’s beak is the end for almost any fish in the lagoon, and I have heard from local fishermen that a flock of cormorants will “fish out” a lagoon in a week if not in just one day.  The interesting part of the story is that we humans aren’t the only ones to have noticed the cormorants’ efficiency as a fisher.  Large wading birds that routinely fish these lagoons from the shallows have learned to recognize that these visiting flocks of cormorants present a golden opportunity to get a good meal with relatively little effort. 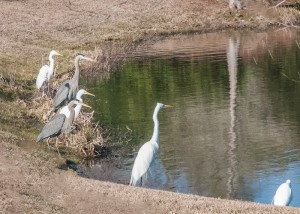 followed by dozens of great egrets and great blue herons, watching the cormorants and eagerly flying over the flock to seek out a catch that might be stolen.  Yesterday I observed the usual complement of egrets and herons accompanied by a pair of bald eagles, all watching the show and many of them looking to steal a meal from the master fisher cormorants.  The usual theft method involved surprise: herons and egrets would fly in a low approach over the flock of cormorants, watching for an unsuspecting cormorant to surface with its catch.

Many times the flyover yielded no steal opportunity, but when the lucky approach coincided with the surfacing of a cormorant with a large fish in its beak, the fun really began!  The lucky thief snatched the fish from the cormorant on the fly and was gone before the cormorant could react, but not before other herons or egrets could give chase and try to steal from the thief.  It was quite a show! The only defense the cormorants have is to move on, and that is what they do.  It is a moving spectacle, with the shores of the lagoon lined with wading birds stretching their necks, watching for their opportunity to share in the harvest provided by the cormorants.  As the flock moves on, so do the dozens of wading birds that follow the flock to the next lagoon and so, presumably, do the eagles.  I did not see an eagle attempt to steal a fish from a rising cormorant, but the pair certainly demonstrated a keen interest in the spectacle in our lagoon.  This was, incidentally, only the second time I had seen a bald eagle flying over our home and it was quite exciting to see a pair of them, wheeling about the lagoon and just above our patio.  I was so enthralled with watching them that I forgot to take a picture!