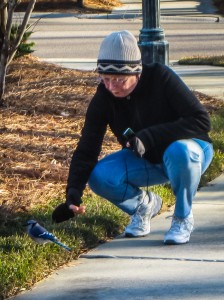 Billie and I walk almost every day, following a 2.6 mile route that goes by Hidden Cypress Golf Clubhouse and the boardwalk through the wetlands wild area behind The Aviary.  One day in late December we met a lady who was talking with a bird, referring to him (or her?) as “Jay.”  She was trying mightily to get Jay to perch on her hand, and she easily convinced us that she had been able to do that in times past.  She even told us that this bird, or one like it, was known to perch on golf carts and to eat snacks from golf carts while golfers were on the green.  We were astounded to see a Blue Jay so tolerant of people since our experience has been that these birds are very skittish. Today we met Jay again, this time on our own, as he came flitting up to us at almost the same point on the sidewalk near Hidden Cypress.  This time he came very close to us, seeming to want to check out whether we had any food to offer.  We did not, of course, but even so Jay stayed with us for several minutes and posed for some portraits which I took using my Canon Powershot P&S.  Jay was incredibly close and very patient with me as I clicked away.

Billie tried to get Jay to perch on her hand, but no dice!  He didn’t panic when she held out her hand, but he wouldn’t perch there either.  Perhaps he was looking for some food as reward for touching a human.  At any rate he stayed with us a bit longer until he seemed to be convinced that we had nothing to feed him, and then he flew away.

We have since learned that the accepted name for this bird is Charley rather than Jay, and that Charley has a very wide reputation here in Sun City.  Hope we see Charley again!  Maybe next time we’ll have some food.

You can see larger portraits of Charley by clicking on the photo above and the one at right.

Professor Emeritus of Chemistry, Appalachian State University.
View all posts by Tom →
This entry was posted in Birds, Commentary, Uncategorized. Bookmark the permalink.

3 Responses to Charley the Blue Jay