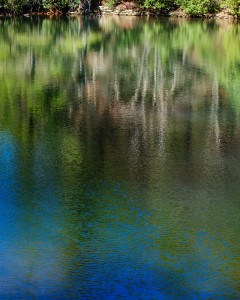 The dancing reflections on the rippled surface of Heart Lake caught my fancy on Friday, and I spent some time trying to capture the effect in digital still images taken using my D300 camera and Nikkor 24-70mm zoom lens.  I used a tripod and a wireless remote shutter release to first lock the mirror up to minimize camera shake and then to fire the shutter after a few seconds.  The results were pleasing to my eye as the spring colors were spread across the surface of the lake and captured in the digital image as a splash of color spread by nature’s brush in a way that was not planned or executed by any human hand. I took several shots from different locations around the lake, concentrating on the abstract reflection of color in the rippled surface.  After processing the images in Adobe Photoshop Lightroom 4.1 I decided that these two were my favorite images.  One of them shows just a bit of the far shoreline, only enough to anchor the reflected images to the actual trees and shrubs that provide the spring colors for the image.  The second image has no anchor to the reality of the forest beyond the lake, but rather shows just the abstract display of color which initially caught my eye.  I think I like that one better.  What do you think?