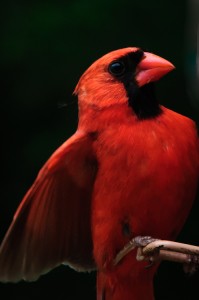 We have really been lucky that the deer have been happy being somewhere else this spring because their scarcity makes it much easier to enjoy the backyard birds.  Deer have a habit of bumping the bird feeders with their noses, spilling the seeds on the ground where they can then eat them, and one or two deer can empty a feeder in a few minutes.  So far we’ve been visited by deer only one night this spring, so the feeders have maintained a fairly constant supply of sunflower seeds for the birds and there have been many regular visitors this spring.  This cardinal has been a regular, and although he’s very skittish I figured out how to photograph him.  I set up the camera on a tripod about ten feet away from the feeder and fired the shutter from inside the house using a remote trigger.  I only got one shot since the shutter noise scared the cardinal away, but at least this one shot was a keeper! I also got some shots of a downy woodpecker which has been visiting us this week, and he was a bit more tolerant of the shutter noise than the cardinal.  This male has been flitting back and forth between the feeder and the large pine tree at the edge of the yard.  While he’s on the pine tree trunk he pecks in the bark and apparently extracts an insect which he then feeds to his mate.  I was able to get three or four shots of the woodpecker male before the pair of them decided to go elsewhere.  These are really beautiful birds, and it’s been fun watching the pair of them alternate between sunflower seeds and insects from the tree bark.  Surely they have a nest nearby, and if we’re lucky we may see some fledglings later in the spring. 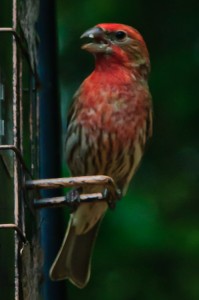 The backyard birds that seem to have the least fear are the house finches and the goldfinches which feed here often.  This house finch, with his red flush on head and breast, is a colorful character who can really put away some sunflower seeds!  He and his cousins the goldfinches are frequent feeders here and they are actually pretty sloppy eaters, seeming to drop as many seeds as they consume.  They are a continuing entertainment to us as they flit around the feeders and chase each other from the “best” perch.   We often see groups of finches vying for position at the feeders. 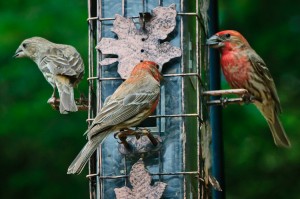 This mixed group of finches, composed of two house finches and a female goldfinch, kept us busy for over an hour today as we watched them bounce in and out while I fired the camera shutter from inside the house.  These characters were intent on feeding and didn’t take any notice of the shutter noise like the skittish cardinal and the downy woodpecker.  They never seemed to be distracted by the shutter firing, and they settled in and monopolized the feeder until a thundershower sent them to the shelter of the nearby trees.  What a great way to spend a relaxing hour on a Saturday afternoon!