The bobcat (Lynx rufus) is one of the fascinating animals that caught our eye at the WNC Nature Center.  This cat, though native to our western North Carolina, is rarely seen in the wild even though its population is thought to be stable and widespread across the area.  It apparently prefers rabbits but will sometimes eat insects or small rodents and even try to take small deer on occasion.  This predator inhabits a variety of habitats in North America, including woodland and swampy areas in our part of the country, and is territorial and almost always solitary, marking its territory with urine and feces deposits.  I have never seen a bobcat in the wild here in the High Country, not even at night on the Blue Ridge Parkway, and I was fascinated with this captive. 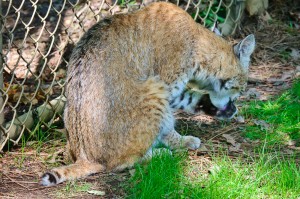 This bobcat is more than twice the size of the largest domestic cat I’ve ever seen, and except for the bobbed tail it looks a lot like a giant domestic cat.  We came to its compound shortly before feeding time, so we found it patiently waiting near the fence, looking for the attendant who would bring the afternoon rations to which it was accustomed.  It sat there on its haunches licking its paws, just like many a domestic cat, while it kept an eye out for the food wagon.  As the attendant drove up in her four-wheeler, the bobcat acknowledged her approach and then padded along the well-worn path toward the feeding area at the far end of the compound. 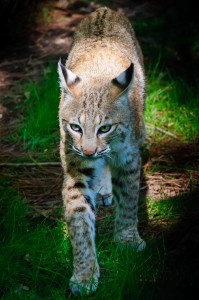 Clearly this is a daily ritual, and one which finds the bobcat active rather than in its usual state of slumber out of view of the Nature Center patrons.  We were lucky to have been there at this time rather than during “sleepy time” when the only shots would have been of sleeping cats.  Reminds me of advice for safari given by Thom Hogan:  know and understand the behavior of the animals you hope to photograph, and approach them when you have a good chance of seeing behavior worth photographing.  Most animals spend a great portion of the day sleeping (observe your own household pets, for example), so if you expect to get photos of something other than sleeping animals you need to approach them when you can reasonably expect activity.  May be easier said than done, but it sure is good advice!

Professor Emeritus of Chemistry, Appalachian State University.
View all posts by Tom →
This entry was posted in Animals, Wildlife Photography. Bookmark the permalink.