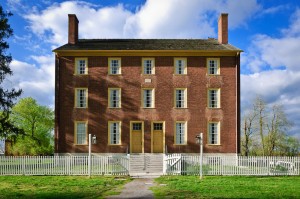 Our Kentucky tour took us to Pleasant Hill for our accommodations in the East Family Dwelling in the Shaker Village.  This building housed the younger, newer members of the sect, including those who were deciding whether to stay long term.

Like most buildings in the Village this one has two doors, one on the left for Sisters and the one on the right for Brothers.  We were assigned a bedroom originally used by Brothers (second floor, right front) which has been renovated for modern tourists like us: comfortable beds with Tempur-Pedic mattresses, a private bathroom with an invigorating shower, some interesting period furniture, a flat-screen TV, and Shaker pegs all around the walls rather than a closet.  Overall, these were excellent accommodations from which to tour the Village and the area. 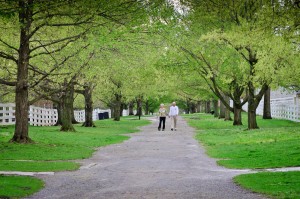 The main street, once a major highway in the area, is free of traffic now that the highway has been re-routed around the Village.  Originally this street carried all of the heavy traffic on this major East-West turnpike, including the armies of both sides during the Civil War.  Because of their neutrality, Shakers ministered to both armies and helped feed them, and we are told that neither army bothered the Shakers as they passed through the Village.

This tree-lined street leads from the East Family Dwelling on the East to other Dwellings and working buildings as we explore the Village.  Barns and feedlots along the way house cattle, horses, goats, chickens, and a Bourbon Turkey.  The couple shown here, John and Betty Bond, grew up in small towns in central Kentucky near Pleasant Hill and they were our host and hostess for the week. A number of interesting trees and buildings line the main street.  This old tree seems to have endured many stresses over the years yet it has endured to a fine old age, much like the buildings which surround it in the Village.  Each morning as we walked to breakfast in the Trustees Dining Room we got a fresh view of this old sentry just across the street.  Incidentally, that hearty breakfast every day helped make this a true “five-pound tour,”  and tours of four distilleries (complete with tastings and samples of their products) and a host of outstanding restaurants sealed the deal. The trees were filled with songbirds, and we were awakened by their singing each morning.  As we explored the main street of the Village we often saw them perched in the low branches, singing away.  What a pleasant start to each day, rain or shine!