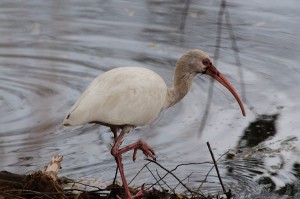 Although I didn’t find any nesting ibis on my recent hike in the Pinckney Island NWR, I did see an ibis feeding at the shoreline of Ibis Pond.  This bird allowed me to get quite close and didn’t move off until I approached a little bit too closely.  His comfort zone seemed to extend about ten feet, much closer than I expected.  He is a dirty bird, because of his digging in the muck on the pond bottom here in the shallows.

I also saw a few alligators on this hike, and this one was the largest of the lot.  He (?) was sunning on the eastern edge of Ibis Pond, and didn’t move at all while I approached for photographs.  Of course I didn’t get very close, but I needed to get close enough to photograph those teeth.  These daggers are really impressive, and not something I would want to encounter from close up.  Other gators I found at Ibis Pond were much smaller than this one, and the others were distributed around the pond far away from this big guy.  I guess he is the one in charge and doesn’t want to be disturbed by the others.