Weather warning last night for the Island: dense sea fog is approaching from offshore; driving will be hazardous with severely reduced visibility.  Combined with the full moon, this made for a fairly exciting combination which I had never experienced, so I prepared myself to be impressed by the “pea soup” that was apparently coming our way from out at sea.  I must tell you, however, that I was a bit underwhelmed by this phenomenon. 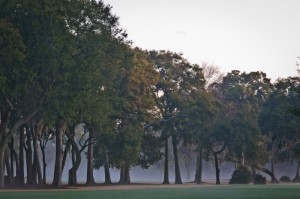 The fog was beautiful and eerie in the full moonlight last night, but it wasn’t the thick fog I thought of when I read the warning of approaching sea fog.  I wanted more!  I wanted something new to me, a fog so thick I could feel it, a fog so thick and oppressive that one might meet Sherlock Holmes in it while out walking the dogs before bedtime!

But that didn’t materialize, at least not while I watched last night.  The fog was still there this morning, obscuring the corners of the golf course, and I love the effect one gets while walking through it.  This fog is not that different from our mountain valley fogs which fill up and spill over and then burn off with the late morning sun.  It may be unusual here on the Island, but it’s commonplace in the Appalachian mountains where we live for most of the year.  And it is beautiful whatever the source and by whatever name it is called.