Sunrise in our neighborhood

Today I got out and about at sunrise with the purpose of  taking a few shots to document the stillness and the awakenings taking place in our neighborhood.   It’s a great time to be out, especially when the temperature isn’t too extreme.

The golf course comes alive with maintenance people soon, and it’s only at this time of day that we can visit with the birds and enjoy the stillness of the early morning.  The island shown above has a huge population of cormorants now, but they will be joined later by the great blue heron nesting pairs which we enjoyed viewing last February. The cormorants roost here and whitewash to lower foliage with their droppings.  Their muted quackings are incessant and they create a background soundtrack as I approach from a distance.

When I get closer, they increase their pitch and their volume, then they rise as one and take flight around the island in a flurry of silhouettes against the rising sun.

The cormorants return to their posts almost as quickly as they took flight, keeping watch for whatever it is they look for from these dead trees. 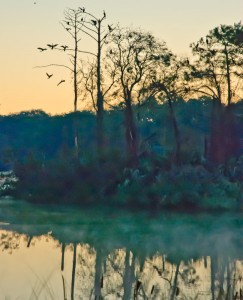 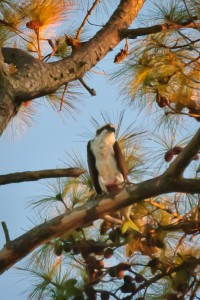 Leaving the cormorants to their watch duties, I move on to the osprey nest we have been watching, hoping to see the nesting pair as they set up housekeeping in the spring.  So far we’ve only seen a single osprey near the nest, and today I’m in luck because there (s)he is!  And (s)he has a fish!  As I walk around under the pine tree supporting the nest I hear an angry scolding, telling me that I will not get any portion of that fish and that I should buzz off!

I snapped a few more shots of the proud bird and then moved on.  I really wished I had brought my telephoto lens!  Maybe I’ll learn from this and be prepared next time…

I hope you enjoyed this sunrise tour of our neighborhood!

3 Responses to Sunrise in our neighborhood