I visited the Audubon Newhall Preserve on Hilton Head Island Thursday, January 24, and while there I happened upon an anhinga having lunch.  As I approached the observation deck on the north bank of the pond I saw some movement along the bank further to the south.  Luckily I was able to find a vantage point on the observation deck which gave me a clear view of the source of the movement—an anhinga hoisting a large sunfish with its bill and then slamming the fish against a log. I watched for almost an hour as the anhinga set about the task of stunning or killing the fish before adjusting its hold to begin the swallowing process.  I was doubtful that the bird could swallow such a large fish, but then I was fascinated as it adjusted the fish to be swallowed head first.  The jaw of the anhinga must clearly be loosely-hinged to accommodate such large meals, because it easily swallowed the whole fish and followed it up with a few drinks of water.  Then the anhinga spread its wings to the sun to dry out before trying to fly away.  Incidentally, the turtle in the background slept through the entire drama. 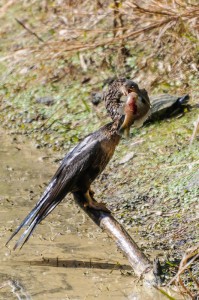 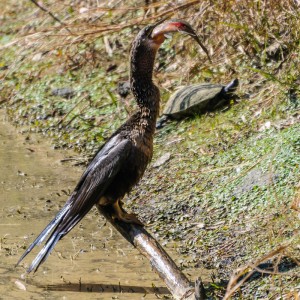 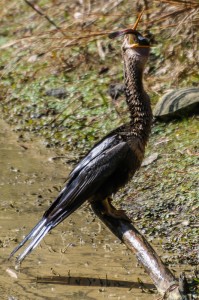 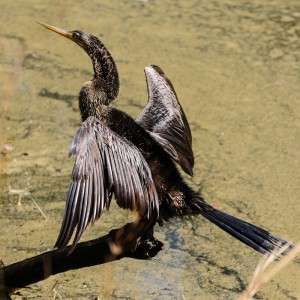