We recently returned from the 41st Annual Albuquerque Balloon Fiesta where we saw ~750 hot-air balloons rise in waves into the early morning sky.  These balloons were multi-colored and came in a variety of shapes, ranging from the traditional “inverted teardrop” to shapes of cartoon characters and demons and dragons of movie lore. 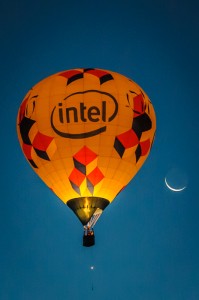 The Intel balloon took off first, rising into the pre-dawn sky at just the right angle to allow me to photograph it alongside the crescent moon.  This early riser was soon followed by a number of colorful balloons, rising in waves according to their assigned launch times.  The show was absolutely eye-popping, with so many balloons in so many colors and shapes rising so quickly in rapid succession through the cold morning sunrise. The morning was cold and we really weren’t dressed for the weather, so by the time we returned to our motor coach for the ride back to our hotel and a big breakfast buffet we were all chilled to the bone, especially to the bones of our feet.  But I must confess that I never felt that cold until I reached the warmth of the motor coach, and it didn’t take long to forget the cold toes as we compared notes on the exciting events at the Balloon Fiesta Fairgrounds. 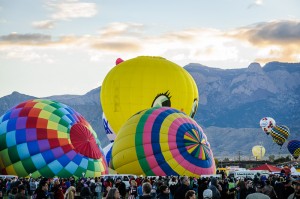 As our coach left the parking area we realized just how many thousands of people were at the event that morning as we drove for over a mile past the parking provided for private automobiles of people attending the show.  How lucky we were to come as members of a large group in our own private motor coach with preferred parking only a few steps from the gate to the Fiesta Fairgrounds! 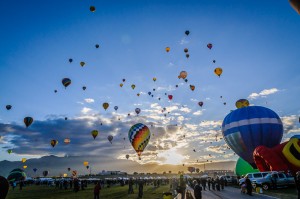 As the sun came up over the Sandia Mountains the number of balloons in the air was overwhelming, but truth be told we were only about half-way through the launch at sunup.  The wind in the Albuquerque valley seemed to circle around and carry the balloons in a huge circle, allowing them to travel for a relatively long time without danger of being swept away over the mountains or down the valley toward the airport. 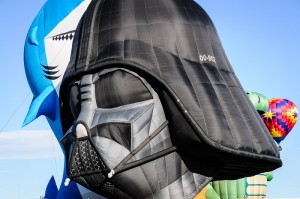 Some of the more interesting shapes of balloons were designed to portray characters from the movies and from TV.  This Darth Vader balloon was striking in its detail and it attracted a great deal of attention as it inflated in the early morning sun.  We didn’t see it launch before we left, but what we saw of it just before launch was pretty impressive. 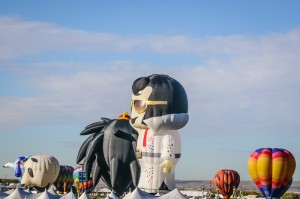 It was appropriate that as we were leaving the Fiesta Fairgrounds, Elvis was preparing to leave the premises as well, one of the last wave of balloons to take to the sky on this beautiful morning.

What a wonderful experience this was to see these waves of color and shapes launching in waves into the early morning sky on such a beautiful morning.