On June 26 I noticed that the “big rhododendron” were already blooming along the Boone Greenway Trail, so I set out the next day to put my copy of the 105mm f/2.8 MicroNikkor through its paces using my D300 camera body.  The lens is incredibly sharp for macro subjects, and I have previously published some blog entries showing macro shots taken with this lens.  My goal today is to try the lens at a variety of subject distances and at moderately close range as well as at macro distances, so I attached it to the D3oo and set out with no other lenses. Using this fixed focal length lens proved to be an eye-opener since I have become dependent on having a zoom lens.  While it is true that one can “zoom with your feet” and move closer to the subject in order to fill the screen, it truly was surprising to me to be made aware of how much I had become dependent on the zoom for framing shots.  Photographing this Widow Skimmer dragonfly proved to be a challenge because he (I think the white haze on the wings indicates it is a male) kept moving as I got close.  Eventually, I took some shots from a moderate distance and relied on cropping to fill the frame.  The sharpness of the lens enabled a significant crop so that the framing could be done in post-processing rather than in the camera.   I prefer to frame in the camera when possible, but the skittish dragonfly would not allow it and the lens resolving power made up for it. 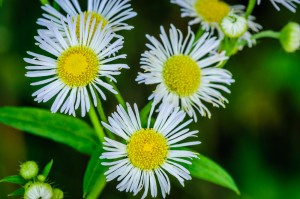 My next subjects were these aster-like fleabane flowers which are approximately 1/2 inch in diameter.  They grow waist-high along the shady portions of the Boone Greenway Trail, and I love to photograph them since they are so small and delicate.  The name apparently comes from the early belief that picking them and bringing bouquets of fleabanes into the house would prevent infestations of fleas.  (Don’t know if this works, but somehow I doubt it.)  At any rate I had no trouble framing these flowers because they grew along the trail and moving the camera close was relatively easy (though not as convenient as zooming a lens!). 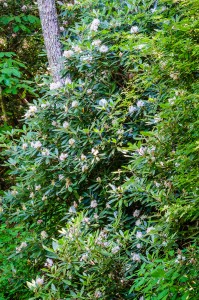 My primary subject on this hike was to be the Rhododendron maximum which at the end of June is now filling the forest with blooms, and I found huge displays of this flowering shrub in the higher portions of the Trail.  The 105mm lens proved to be a capable tool for photographing displays of the rhododendrons, and the resolving power of the lens is sufficient to enable significant cropping as well. 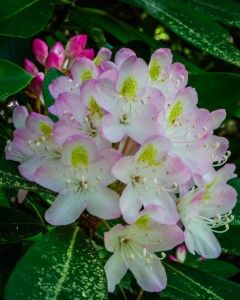 Individual flower clusters show a blush of pink along the edges of the petals with a splotch of yellow in the throat, making this an uncommonly beautiful flower which I place among my favorites.  From a distance the flowers display an overall white coloration, yet these subtle colors which are visible upon close inspection lend a special beauty to the flower. 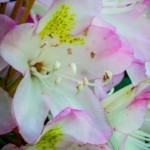 This closeup image of the individual flower parts illustrates the subtle beauty of the color combinations found in the Rhododendron maximum.  The 105mm MicroNikkor easily resolves the delicate features of this bloom, and close captures like this are rendered with sufficient depth of field by stopping down the aperture of the lens while using a tripod.  The resulting slow shutter speed is a problem only when the wind is stirring, and on this day I was able to wait for a calm period to take the photograph. 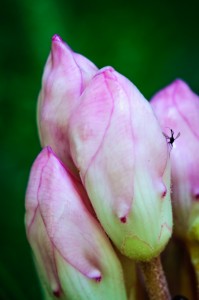 The sharpness of the 105mm MicroNikkor is illustrated by this image of not-yet-open buds of the rhododendron, with a small insect clearly visible on the flower parts.  This is a full-frame image with no cropping, illustrating the close capture abilities and the magnifications this lens can perform.  This is not yet at the limits of magnification, though to go to full 1:1 reproduction one would need to be much closer and the lighting could become a problem in natural settings.

I enjoyed putting this lens through its paces, trying shots at a variety of distances and a range of reproduction ratios.  I have learned a lot about the capabilities of this lens and I’ll be able to use it more effectively as a result of this day of shooting.

3 Responses to Shooting with the 105mm f/2.8 Micro-Nikkor Lens