Just to show that one doesn’t have to have an expensive DSLR to capture photos with fine detail and color, I took this photo of flowering kale here in Palmetto Dunes using my Canon Powershot ELPH 100HS point-and-shoot camera.  This little jewel came to me free of charge along with my latest Dell computer, and I carry it with me almost everywhere I go.  It takes sharp photos, as this image of the kale will attest. 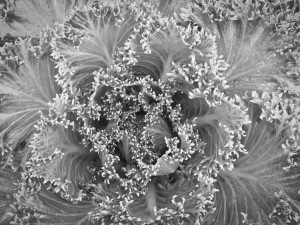 I converted the shot to black-and-white to emphasize the pattern rather than the color (which I also like) and I find that I like the B&W image at least as well as the color one.  This image was taken in late morning, in full sun, using the hand-held point-and-shoot camera.  I braced my elbows against my sides to steady the camera as much as possible, and the result was pleasingly sharp.  The color of this plant is very attractive, but so is the complex pattern of the crinkled leaves.  Which do you like better?