Some of my favorite landscape features include water and leaf color, and I rarely pass up an opportunity to capture these features, especially when I find them together.  I found just such a combination at Sims Pond on October 12 when I was out shooting leaf color along the Parkway. I captured this shot with a Nikon D300 camera equipped with a Nikkor 16-85 mm VR zoom lens set at 22 mm, with exposure controls in aperture priority mode.  Exposure was at 1/60 sec at f/16, ISO 200, with -1/3 stop exposure bias.  I used a tripod with remote trigger to release the shutter about five seconds after raising the mirror to minimize camera movement due to “mirror flop.”  I composed the shot to include the shoreline rocks and goldenrod in the foreground, thinking that in-focus elements in the foreground would introduce depth in the photograph.  I posted the image on the Image Critique forum on the CNPA (Carolinas’ Nature Photographers Association) website in order to get critique from experienced nature photographers. 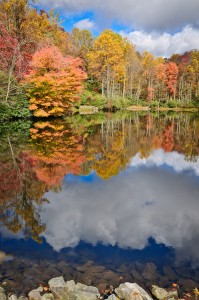 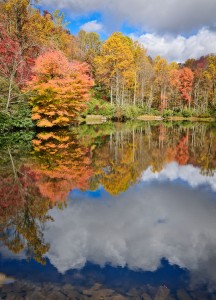 In order to further investigate the role of foreground elements in the composition of the image, I removed the foreground shoreline entirely by cropping the bottom of the image as shown at the right.  This cropped image is not the same  aspect ratio as the first two since with the bottom being cropped, the resizing of the photos to the same height makes this one a bit wider.  Other than that difference in aspect ratio, the images are the same and comparisons of the three gives one the opportunity to judge whether one has a preference for no foreground elements, only the rocks in the foreground, or rocks and goldenrod.  Each of the foreground elements is in focus, so the only question is whether their presence strengthens the image.  Perhaps the choice is just a personal preference which varies from person to person, but it is important for the photographer to know which choice creates the stronger image since we only get one chance to present it to the viewer.

What do you think?  Which choice would you make in deciding which image to release for public viewing?  And having seen the three choices here, which choice will you make when you photograph your next landscape composition?