Leaving Edinburgh, our tour headed south toward England where we found this piper playing for tips at the border.  The countryside here was very picturesque, with panoramic views of Scotland behind us and similar views of the English countryside ahead of us.  As we crossed into England we encountered more farmland with sheep and cattle grazing in the stone-fenced pastures we had become accustomed to seeing.  As we headed toward Hadrian’s Wall and our pub lunch of fish and chips at The Swan in the village of Heddon-by-the-Wall, our driver explored almost every road in the English countryside before finding the right one.  Lunch was a welcome sight when we finally got there! 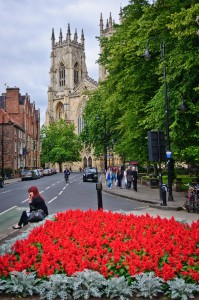 After lunch we made our way south past Newcastle and on to York where we toured the beautiful York Minster.  This extraordinary cathedral is the central attraction in the beautiful city of York, along with the old town street of the Butchers of York known today as the Shambles.  The Shambles is mentioned in the Domesday Book of William the Conqueror and it was rebuilt in its present form about 1400.

Our hotel in York, the Park Inn York, sits on the bank of the River Ouse and provides tranquil views of the city from the higher floors.  Early morning fog along the river covered the city and obscured the Minster the day we left York for Coventry.

Coventry Cathedral provides a striking contrast to the York Minster since it was built after the original cathedral was destroyed in the bombing of Coventry in World War II.  The new cathedral was built alongside the bombed-out ruins of the original cathedral, generating an ever-present reminder of the tragic events of the war.  After Coventry we traveled to Stratford-upon-Avon to tour Shakespeare’s home and Anne Hathaway’s Cottage, a fitting end to our tour of the United Kingdom and the Republic of Ireland.